@MichaelToole The series really was an underrated gem of that particular era imo. It got a decent amount of adverti… https://t.co/RAHawxwfsH 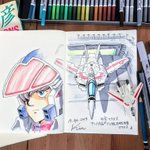 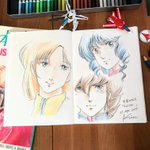 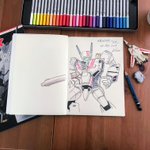 @KithKanan Pass on what you have learned.

@jefuemon_ver2 I just want the Milky Doll member that is included.
3

@RENATOLOGY This is why that hand broke, people! 🤣
5

The man, the legend, the mover of mountains (and chewer of leaves) himself, Nobutoshi Canna was a guest at Otakon back in August. Friend of the site and podcast contributor Cassie was lucky enough to meet him and talk about what went into playing Basara…

Originally written by Renato on September 19, 2015

As we board the hype train leading up to Kazutaka Miyatake’s exhibition of original artworks, let us look at a recent interview with him conducted earlier this year for the “SDF-1 Macross: Thorough Dissection” book — you know, the one which also doubles as an enormous 1/2400 scale papercraft model of the Fortress Exceeding Space and Time itself (the cover of the book stoically assures us that it is genuine “Deculture Scale”, no less).
The translation starts right after the jump! (I tried to be as accurate as possible, and that is why the four in-text notes are oddly numbered: there are two #3’s, and there is no #1. )

An Interview with Mari Iijima (SDC 2018)

Singer song writer, pianist and actress Mari Iijima, who lent her voice to the role of Minmay in the original Super Dimension Fortress Macross, attended Super Dimension Convention this year as a very special guest and performed to a packed hall. With the line for autographs afterwards reaching out of the lobby and well into the courtyard, we were unable to catch up during the con itself, however she was gracious enough to agree to the following interview afterwards.
(Photos by Nago Wk & Channel Chin, used below with permission)

The Annual Shizuoka Hobby Show was held from May 10-13, with the first two days being business days and the second two being open to the public. While much of the hype surrounding the show often involves model kit companies announcing the newest and hottest upcoming kits, the public days offer serious model builders the chance to show off their talents. In past years, many Macross fans have come across photos online of the work of a modeling group called the “VF-1 Riders” – a collective of Japanese Macross modelers who focus primarily on valkyrie model kits and customs.

Enter Jefuemon. The only westerner to participate in the VF-1 Riders group, he is a long-time modeling enthusiast and what can only be described as a hardcore Macross fan. He sent us in the following report and photo gallery from this year’s hobby show, which can also be found over at his blog along with updates on his latest projects.

The following concert report was sent in to us by Osaka-based Macross fan Howard Browning.

I was lucky enough to see JUNNA in Osaka on her first solo tour last year, so when it was announced she’d be back this April, I jumped at the chance. My luck held out in the ticket lottery and so on the 22nd I was lined up in front of Namba Hatch waiting to get in.

Namba Hatch is a much bigger venue than Osaka Big Cat where she played her first shows. She played two shows at Big Cat compared to one show at the Hatch, but it’s a step up. While Big Cat was hidden away in a mall, the Hatch is an Osaka landmark with it’s octagonal hall perched on top of a 3 story building.